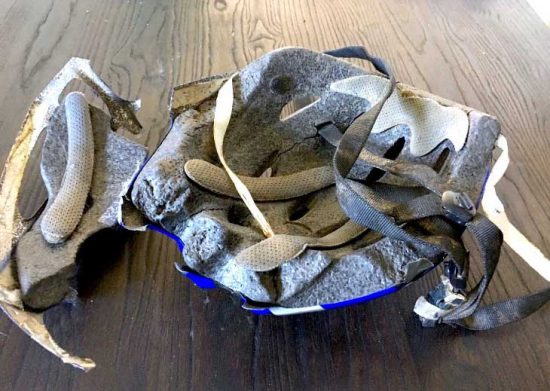 It was supposed to be a simple training run. I needed to be ready if I wanted to compete in the Oita International Wheelchair Marathon. It was a sizzling Sunday afternoon – 94 degrees – and I thought I would do a quick 10K so that I didn’t risk heat fatigue. Near the 3.1 mile mark where I would turn around, there was a considerable downhill section where I pick up speed. That day, I was going precisely 30.2 mph.

Two weeks later I was struggling to grasp what had happened to me; fighting through the fog in my mind and pain in my back. Bright lights shone overhead as I lay in a hospital bed with tubes in my body, and people dressed in white were scurrying in and out. My wife and brother were filling me in – again – on what had happened to me. For two weeks they have been telling me the same story; I had been hit by a pick-up truck coming the opposite direction.

My helmet did it’s duty – breaking off upon impact to lessen the blow – but it also pulled a 4 inch flap of my scalp back. I had a Cervical Vertebrae process fracture and a Lumbar Compression at the 2nd level. My collarbone and shoulder blade were both broken and protruding out of my left shoulder and two ribs had punctured my left lung. The worst part, however, was how hot the pavement was due to the 94 degree heat – 60% of my back and hip were covered in 2nd and 3rd degree burns. The emergency Medivac helicopter was called after life function stopped, and I was taken to the University of Kentucky Hospital in Lexington.

God has graced me with not remembering my accident. I can remember about a mile back on the road, and the first two weeks in ICU are foggy. I was able to see a police report from the accident, which showed pictures of the road and damage that was left. There was no clear way to tell whose fault the accident was, but I wanted someone to blame; I wanted someone to pay for what I was going through. The pain from my burns, exhaustion from therapy, and time spent going over my recovery and poring over different facilities’ schedules was taking its toll on both me and my wife. A lawyer suggested that I get a private investigator to see what had actually taken place on that road. After writing a large check I got back a report saying that it looked like it was my fault, but in a court of law we might be able to persuade the jury that it was 30% the pick-up driver’s fault. If he had vehicle insurance, that would mean that I could get some help with the costs. After one helicopter ride, two hospital stays, three stints in rehab, four operations and five months out of work, the bills were adding up. As was the mental toll. The driver lived just a mile and a half down the road – he had even seen me out training before – and every time I drove past his place it would burn deeper into my mind that he was the one who caused this pain and suffering.

That following Sunday God must have been whispering into the pastor’s ear; the sermon was on forgiveness.

“But with you there is forgiveness; therefore, you are feared.”
-Psalm 130:4

There was one person who could tell me what had happened the day of my accident, but he was the one I feared talking to. However, I knew that I needed to let him know that if it really was his fault I would forgive him, and if it was my fault I hoped that he would forgive me.

In thinking about all this I started wondering how I would reach out to him. Again, God must have had it all planned out as the following Tuesday I was going by his house and saw him out in his driveway. I stopped in the street and backed up as he turned around to see what was going on. I pulled in the drive.

“I’m Paul; the guy that was in the racing wheelchair when we collided. I don’t know what happened that day, but I just want you to know that if it was your fault, I forgive you. Should it be my fault I hope that you can find in your heart forgiveness for me”.

He said that he had called me soon after my accident but I seemed very out of it. He went on to tell me his side of the story:
“As I was rounding the bend at the bottom of the hill, you were on your side of the road but near the yellow center lines. You must have jerked the steering too sharply because you came near the edge of the road and hit a depression.”

He went on to say that whatever I had hit caused my three-wheeled racing chair to go up on two wheels three times before slamming into his driver’s door. After he finished recounting the story, I was left with the knowledge that it was my fault. I let him know that there would be no legal action on my part, and he told me that there would be none from him either and that insurance paid for his truck. I didn’t want to spoil the good news by telling him it was mine; I knew what the exact price was for the repair. Our hearts were both lifted that day; as his wife was coming out of the house he ran over to let her know that I had come by to give my forgiveness.

It was quite a load that was lifted off of my heart and mind. It was like a fresh start; it lifted the heavy burden and stopped the rage and resentment. After that my concentration was to get better through physical therapy, to get back to work and to start being productive. I regret the time that I spent dwelling on the negatives. I was on the road to recovery and life was going to be great again.

Do you have someone in your mind, or in your heart, that you need to forgive? Be forgiving and you will be amazed at what it leads to.